END_OF_DOCUMENT_TOKEN_TO_BE_REPLACED

Selby Abbey to be dramatically lit up for spectacular art show 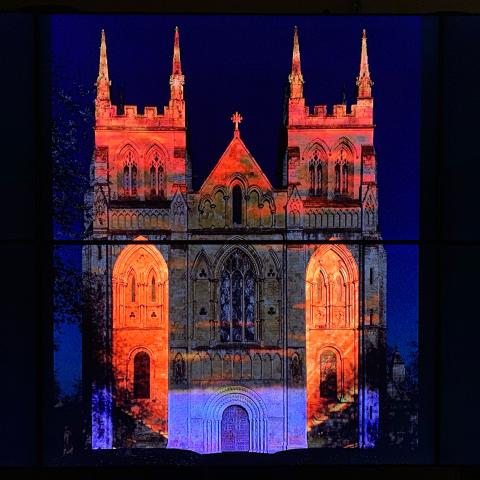 Selby Abbey will be dramatically lit up in a spectacular art show in what will be one of the most significant Selby 950 celebration events.

The Pilgrim event is set to be one of the most significant events for the town’s year of cultural celebrations, featuring stunning, dynamic lighting and digital projection. The District Council has invested £50,000 to deliver a programme of arts and heritage events to celebrate the 950th anniversary of the founding of Selby Abbey. The Council has been awarded just under £70,000 by Arts Council England and £45,000 by National Lottery Heritage Fund for the Selby 950 celebrations. The illumination event, sponsored by Drax Group Plc, is one of the significant arts events being delivered by the District Council.

The award winning multimedia artist Nayan Kulkarni is designing the dynamic lighting and digital projection art installation that will unfold on the west elevation of the Abbey for three nights. The event will be free.

Nayan commented, “Pilgrim is about what it means to represent and experience light in architecture and landscape. It will tell the story of an imagined pilgrimage by following the journey of the river from the sea, across the land to Selby Abbey and beyond to its source. Through a spellbinding, mesmeric layering of sound and moving image the work will explore ideas of time and place.”

Nayan has worked across the UK on a diverse range of arts projects including the Blade installation as part of the Hull City of Culture event in 2017.

Drax Visitor Centre and Communities Manager Jane Breach said, “We’re delighted to support the Selby 950 celebrations.  Drax employs 900 people at the power station near Selby – and whilst our history is significantly shorter than the town’s - we’re proud of the connections we have developed with the local community over the last 50 years.

“We’re looking forward to the Pilgrim event; it’s sure to be a highlight in a really special year.”

Executive member, Cllr Chris Pearson, commented, “This will be a remarkable event and a fantastic way to celebrate the important role the Abbey plays in our town.

“I’m particularly pleased that the event is free – we want to include as many people as possible in the Selby 950 celebrations and encourage those who wouldn’t normally come along to this kind of performance to experience something completely different.”

The artwork will combine live performance, recorded footage (made during a period of residency in Selby) and interactive live video captured during the presentation of the work.

Nayan Kulkarni, will also give talks to Selby College Art & Design students during the development and making of Pilgrim.

Made possible by sponsorship from Drax Group Plc and money raised by National Lottery players, Arts Council England have awarded significant funding from their National Lottery Project Grants programme, to Selby District Council to deliver a programme of arts and heritage events to celebrate the 950th anniversary of the founding of Selby Abbey.