END_OF_DOCUMENT_TOKEN_TO_BE_REPLACED

'Pinewood of the north' plans for Church Fenton 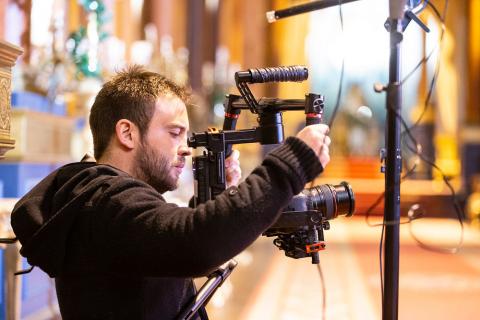 Church Fenton airfield, in the Selby district, is on its way to becoming one of Yorkshire’s premier creative hi-tech business, television and media centres.

Plans have been approved by Selby District Council to provide commercial space for a wide array of businesses from within the creative industries on one, purpose-built site. The aim is to utilise the airfield to deliver economic diversity and growth for the Selby district - which sits right at the heart of Yorkshire - whilst creating hundreds of sustainable new jobs locally.

The vision of Create Yorkshire, the brand name for this bold initiative, has been given impetus by the success of the film and television studios already at the site, which has been used to film ITV’s hit TV show, Victoria. The award-winning programme has recently completed filming a third series at Church Fenton with over 170 cast and crew members, from production staff, actors, extras and caterers, transforming the airfield into a kaleidoscope of colour, fashion and history.  The site, which is just to the east of Leeds, will also benefit from the proposed relocation of Channel 4 to the Yorkshire city.

Land owner, Chris Makin, commented: “We have the will, the expertise and the capacity to create the Pinewood of the north here. The UK’s creative industry has witnessed a period of significant growth in recent years and is now worth a record £84 billion to the UK economy. Create Yorkshire could further boost Yorkshire’s film and TV industries and ensure the creative industries remain a thriving sector in the north of England.”

Once fully operational, the creative hub and studios could eventually support around 1,800 permanent jobs in the creative and digital sector.  Further jobs will also be created through the construction period and in the supply chain supporting the site.

Selby District Council's Executive member with responsibility for economic development Cllr David Buckle, added, "What a fantastic opportunity to deliver great quality jobs right here in the Selby district.  This development focuses on a sector of the UK economy that's growing fast and now is a great time to be working with the creative industries to make something really special in our area.

"The Selby district is right at the heart of Yorkshire with affordable business space, fantastic road and rail connections and a great quality of life - all of which makes it an ideal location in which to invest."

One of the creative industries already on site is production company, Seven Video.  The small firm has expanded considerably over recent months and the team has recently done work as far afield as New York.  Business Development Manager, Paul Sherwood, added, "We wanted to move to Church Fenton from our previous base because we can see the advantages of being at the heart of the action.  The plans to open up more opportunities to bring in other creative businesses will create a community that can thrive off each other.  Our position right at the centre of the economic hubs of Leeds, Hull, York and Sheffield puts us in a very strong position to reach out to lots of different clients".

Support for growing digital and creative companies is a key part of the Leeds City Region’s plan for growth.  Roger Marsh OBE, Chair of Leeds City Region Enterprise Partnership (LEP) explained, "The move of Channel 4 into our region demonstrates the important role Yorkshire is going to play in the future of digital and creative industry in the UK.  These are high skilled, well-paid jobs that open up fantastic career opportunities for people in this area.  The Church Fenton development is an important part of the region's offer to creative businesses."

The submitted ‘hybrid’ plan now agreed by Selby District Council includes a flagship HQ-style building and the conversion of existing aerodrome buildings into studios; with outline permission for the development of a creative, digital and media industries employment hub.  The aim is to encourage a range of companies related to the entertainment sector to locate to the site and potentially collaborate.

Watch a short film here about the site.