END_OF_DOCUMENT_TOKEN_TO_BE_REPLACED

Motorists urged to 'Kick the Habit' in new campaign 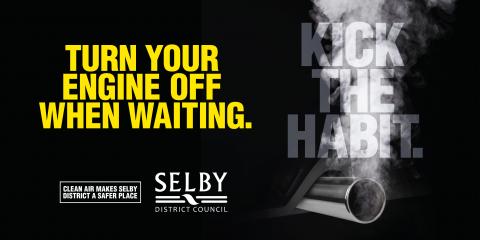 A new district-wide campaign is encouraging drivers to ‘kick the habit’ and switch off their engines while parked.

The campaign is urging people to think about the importance of clean air and the impact pollution has on them, their health and those around them.

Councillor Chris Pearson, Lead Executive member for Housing, Health and Culture, said: “Leaving your car engine idling causes air pollution which can easily be reduced by simply turning engines off when in traffic or waiting.

“Turning off your engine when parked up and waiting will not only improve air quality but will also save you money.”

The Kick the Habit campaign, which launches on Clean Air Day (8 October), will see information shared with pupils, parents, and teachers at a local primary school in a pilot to improve air quality around the school.

Headteacher at St Mary’s Catholic Primary School, in Brayton, Fiona Robertson explained: “We will be asking parents picking up their children from school to turn off their engines while they’re waiting and talking to our pupils about air pollution. This project is a great way to discuss the issue and highlight the personal actions that can be taken to improve air quality around our school.”

Air quality will also be monitored at the school - this information will then be used to assess pollution at specific times.

And across the district anti-idling posters and banners are going up in all council owned car parks in Selby, Tadcaster and Sherburn. These will also be installed in Selby at the taxi rank, at the Doncaster Road level crossing and on railings in the Crescent – areas that often see queuing traffic.

New Kick the Habit posters are also being made available to parish and town councils and local businesses. These can be used in car parks and other areas to tackle the issue.