END_OF_DOCUMENT_TOKEN_TO_BE_REPLACED

Have your say on plans for £17.5 million walking, cycling and public transport boost in Selby 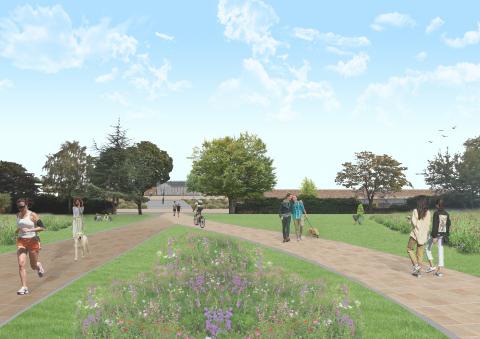 People are being asked to have their say on £17.5 million plans to boost walking, cycling and public transport in Selby, delivered in partnership by Selby District Council, North Yorkshire County Council and the West Yorkshire Combined Authority.

“This is a once in a generation chance to totally re-design this part of Selby town centre,” explained Cllr David Buckle, Lead Executive Member for Communities and Economic Development at Selby District Council. “We want to create a new link between the station and our beautiful Abbey. We want a new footbridge over the River Ouse to the Olympia Park site to open up this area and we also want to improve links to the station from big new development sites, to make it easier for people to cycle and walk to the station.

“We're really excited to share this vision for how this part of the town can be transformed.  Selby district is the fastest-growing in North Yorkshire and we're seeing lots of new investment in Selby town centre.  Setting out bold and ambitious plans like this is a way in which the District Council can support this new investment and continue this transformation.”

The scheme is being funded through the Leeds City Region Transforming Cities Fund, which is aimed at providing an accessible, attractive and cleaner alternative to car journeys.

The programme, which is being delivered by the West Yorkshire Combined Authority in partnership with local authorities, will be funded through £317 million from the Department for Transport (DfT) plus local match funding.

Cllr Kim Groves, Chair of the West Yorkshire Combined Authority Transport Committee, said: “We’re delighted to be working in partnership with Selby District Council and North Yorkshire County Council on this important scheme, which will make it easier to travel on foot, by bike and by public transport, connecting more people to jobs, training and education opportunities.

“Our region deserves a transport system which fills people with pride, with optimism and, above all, with the confidence that we have a clear direction of travel towards future prosperity for all, while helping us achieve our aim of becoming a net zero carbon economy by 2038.”

The Council is asking for people to share their views on the plans, with a four week long consultation taking place between 24 February and 24 March. Find out more information about the plans and have your say at www.yourvoice.westyorks-ca.gov.uk/northyorkshire

About the West Yorkshire Combined Authority

The West Yorkshire Combined Authority works in partnership with local councils and businesses to ensure that everyone in the Leeds City Region benefits from a strong, successful economy and a modern, accessible transport network. By championing the region’s interests nationally and internationally, the Combined Authority secures the investment to deliver better transport and housing, help businesses to grow and create jobs.

The Combined Authority works in partnership with the Leeds City Region Enterprise Partnership (LEP) to help businesses in our region grow and become more productive and operates the Metro-branded network of bus stations, travel centres and public transport information for West Yorkshire.

The Combined Authority wants the region to be recognised globally as a strong, successful economy where everyone can build great businesses, careers and lives.

About the Transforming Cities Fund

Providing an accessible, attractive and cleaner alternative to car journeys is at the heart of Leeds City Region’s Transforming Cities Fund - a major new programme of transport infrastructure investment secured as part of the West Yorkshire devolution deal.

The programme, which is being delivered by the Combined Authority in partnership with local authorities, will be funded through £317 million from the Department for Transport (DfT) plus local match funding.

Communities across Bradford, Calderdale, Craven, Harrogate, Kirklees, Leeds, Selby, Wakefield and York are set to benefit from the schemes, which include new or improved bus and rail stations, cycling and walking infrastructure, and new Park and Rides.

The TCF programme is focused on connecting people in the communities of greatest economic need with job and training opportunities.

This will, in turn, help boost productivity, living standards and air quality, helping to create happier healthier communities for the future.

It is estimated TCF schemes will improve journeys by bus, rail, bike and on foot for up to 1.5 million people, take up to 12 million car trips per year off our roads and reduce CO2 emissions from car travel by up to 15,000 tonnes by 2036.

Find out more information about the Transforming Cities Fund programme at www.westyorks-ca.gov.uk/TCF