END_OF_DOCUMENT_TOKEN_TO_BE_REPLACED

Are the district’s payphones still needed? 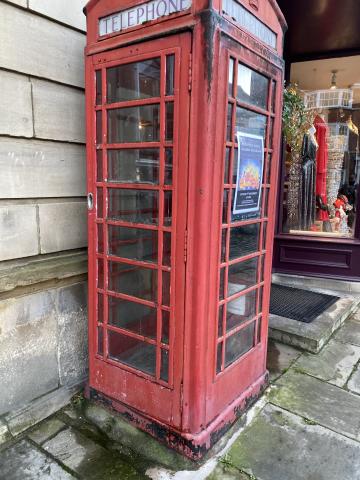 The District Council is asking residents about the fight to keep 12 public payphones located across the Selby district.

The Council’s Executive has made a draft decision to oppose BT’s proposal to remove the payphones and phone boxes from the district in these locations:

Barlby (York Road/Northfield), Church Fenton (Post Office and Fenton Flyer), Cridling Stubbs (Wrights Lane), Hambleton (Main Road), Hemingbrough (Villa Close/Main Street),  Monk Fryston (opp Crown Hotel), Selby (Bondgate), Stillingfleet (York Road), Tadcaster (Stutton Road and Kirkgate) and Whitley (Doncaster Road).  BT has said that 11 of these payphones are not being used enough.  The twelfth phone box is on the list as it is being considered being adopted by Tadcaster Town Council – this relates to the phone box on Kirkgate.

The Council is inviting residents to take part in the consultation and let them know if their opposition to the removal of the payphones is supported by the local community.

Executive member Cllr Richard Musgrave explained, “Payphones are a key part of the emergency network for local communities and some of the phone boxes themselves are also an important part of our landscape. We want as many people as possible to let us know their view on the proposals.”

The Council is also asking residents about keeping phone boxes in communities for different uses, if BT go ahead with the removal.  Local communities can adopt a traditional red phone - alternative uses for phone boxes include a defibrillator station, library, community information point and art gallery.

This consultation is now closed. Selby District Council will consider the responses received and make a final decision on whether to support or object to BT’s plans for each payphone.